Patients are being recruited for a trial to determine whether chemicals in cannabis can slow the impact of multiple sclerosis. #

Evidence suggests the drug may relieve symptoms but the three-year national trial is also to determine whether it slows the disease's progress.

It is estimated that 85,000 people in the UK have multiple sclerosis (MS).

Prof John Zajicek, of the Peninsula Medical School and Derriford Hospital in Plymouth, will lead the research. 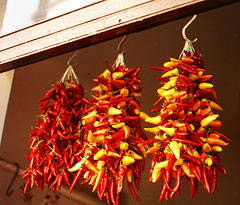 Could the humble chilli pepper hold the answer to arthritis pain?

Scientists at King's College, London are hoping they can harness the heat in chilli peppers and adapt it to combat inflammation in arthritis.

Although the work is still in the very early stages scientists hope their research will lead to a drug being manufactured.

Rheumatoid arthritis is an inflammatory disease, in which the body's immune system attacks the joints, leading to pain, inflammation and stiffness.

An Imperial College London team tested the extract - Cannador - on 65 patients after surgery such as knee replacements and found it helped manage pain.

The researchers believe the results could lead to new pain relief drugs, even though the chance of side effects increased with stronger doses.

The research appears in the US journal Anesthesiology
No comments:

Eating vegetables may prevent hardening of the arteries, research suggests.

US researchers found 38% less build up of fatty deposits in the arteries of mice who were fed a mixture of vegetables, including carrots and peas.

Evidence on the effects of diet on atherosclerosis in humans is not clear but eating fruit and vegetables is known to protect against heart disease.

The study in the Journal of Nutrition said the average person only eats three portions of fruit and veg a day.
No comments:

Drinking coffee could reduce the risk of alcohol-related liver disease.

A US study of 125,580 men and women over 20 years found a 22% reduced risk of developing alcoholic cirrhosis for each cup of coffee drank per day.

But tea was not associated with a reduced risk, indicating caffeine may not be the link, the study in Archives of Internal Medicine concluded.

Experts warned that even if coffee was protective, reducing alcohol intake was the only way to avoid liver damage.
No comments:

Sleeping with the light on or staying up late could be a cause of breast cancer, authoritative new research suggests.

The research - which is being hailed as a "watershed", providing "the first proof" of a link between artificial light at night and cancer - confirms a mass of the studies suggesting that modern life causes the disease by interfering with natural sleep cycles.

Carried out by the blue-chip National Cancer Institute and National Institute of Environmental Health Sciences in the United States, it offers a solution to the mystery of rising levels of breast cancer in rich countries, which are five times as high as in the developing world. One in 10 women will develop the disease.

Repeated studies have shown that night-shift workers - such as nurses or air stewardesses - are up to 60 per cent more likely to get the disease. Another found that women who stayed up late two or three times a week were similarly susceptible. Conversely totally blind women are half as likely to succumb to it.

Studies show that light at night interferes with one of the body's greatest natural defences against cancer - melatonin, dubbed "the hormone of darkness". The hormone - which is secreted by the pineal gland at night, and particularly in the early hours of the morning - both impedes the growth of cancers and boosts the immune system.

"If light were a drug, the government would not approve it," says Professor Charles Czeisler of the Harvard Medical School. And Professor George Brainard of Thomas Jefferson University in Philadelphia, adds: "Humans evolved on a planet without electric light over thousands and thousands of generations. The body is designed to be alert and awake during daytime hours and to sleep at night. Now we have a 24-7 society that isn't in harmony with our biological design."

Source - The Independent
No comments: